Before the construction of the Municipal Theatre, the great hall of the “Palazzo del Priori” was used for performances. Documents from 1809 attest to the presence, in the current Piazza del Mercato, along the street leading from the square to the parish church, of another room used for public performances during the main celebrations, such as the carnival which was animated by local amateurs and small companies of professionals .

In the second half of the 19th century, following a generous bequest from Alessandro Baldoni (1861), the old theatre was demolished and the new one was built.  Started as a project by the architect Raffaele Grilli from Jesi on April 16th, 1872, the theatre was inaugurated on 8th September 1877 with the lyric opera “Maria di Rohan” by Gaetano Donizetti, of which the original poster is still preserved in the Theatre ticket office. 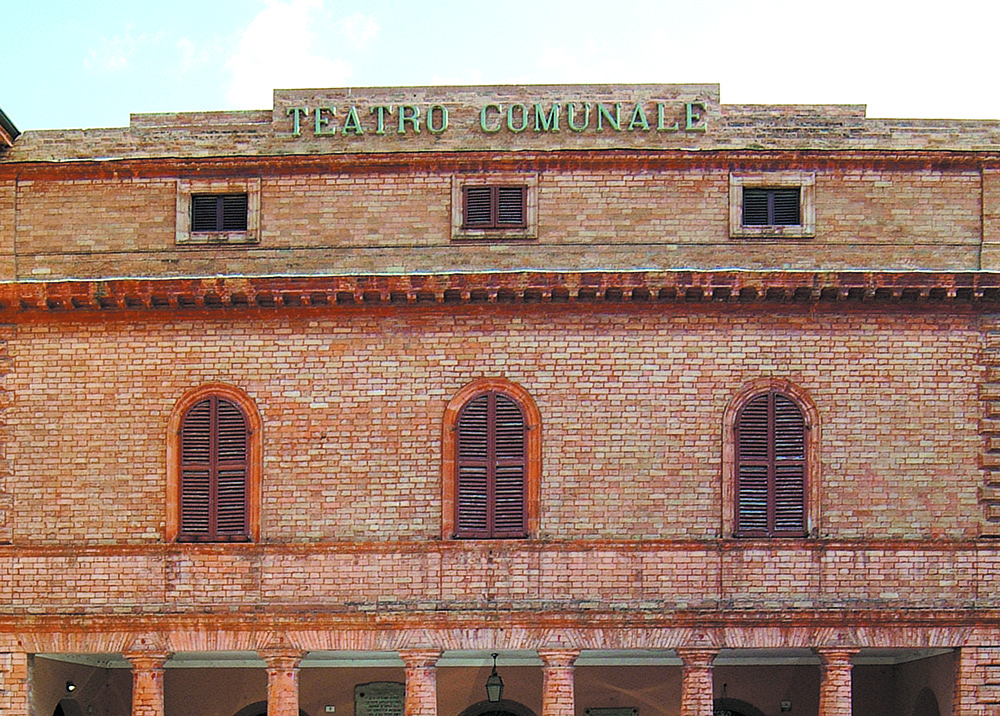 Legend has it that the theatre was built using stones that came from the Trabocco river, which is located in the woodlands at the foot of the hill. Some testimonies recall that it was the women of the village who carried these stones to the square via the path of petrified stone , because it was too steep for pack animals. (The path is still accessible and is one of the two access routes to the Trabocco Park, continuing along via San Nicolò.)

The facade of the building is made of terracotta bricks. The portico is supported by six Doric brick columns and smooth ashlar pillars. The upper floor has three large arched windows in axis with three square windows inserted in the wall of the attic with the words “Teatro Comunale”, above the cantilevered cornice. In 1900 the foyer of the theatre was the seat of the City Club, where the numerous lords and landowners of the town used to meet for a drink or game of cards.

Visiting the theatre, it is possible to admire the rich decorations of Giulio Marvardi from Senigallia, but also the scenic equipment, the work of Enrico Andreani of Ancona and the decorative curtain, the work of the painter Cecrope Barilli from Parma.

Barilli created a scene that portrays the Montecarotto landscape, overlooked by a female figure, who legend has it was a daring Montecarotto girl of the time, who agreed to pose for the master. The three artists intended to give the theatre a clear allegorical and floral intonation, with gilding and semi-gilding that gave the interiors a precious and refined appearance. 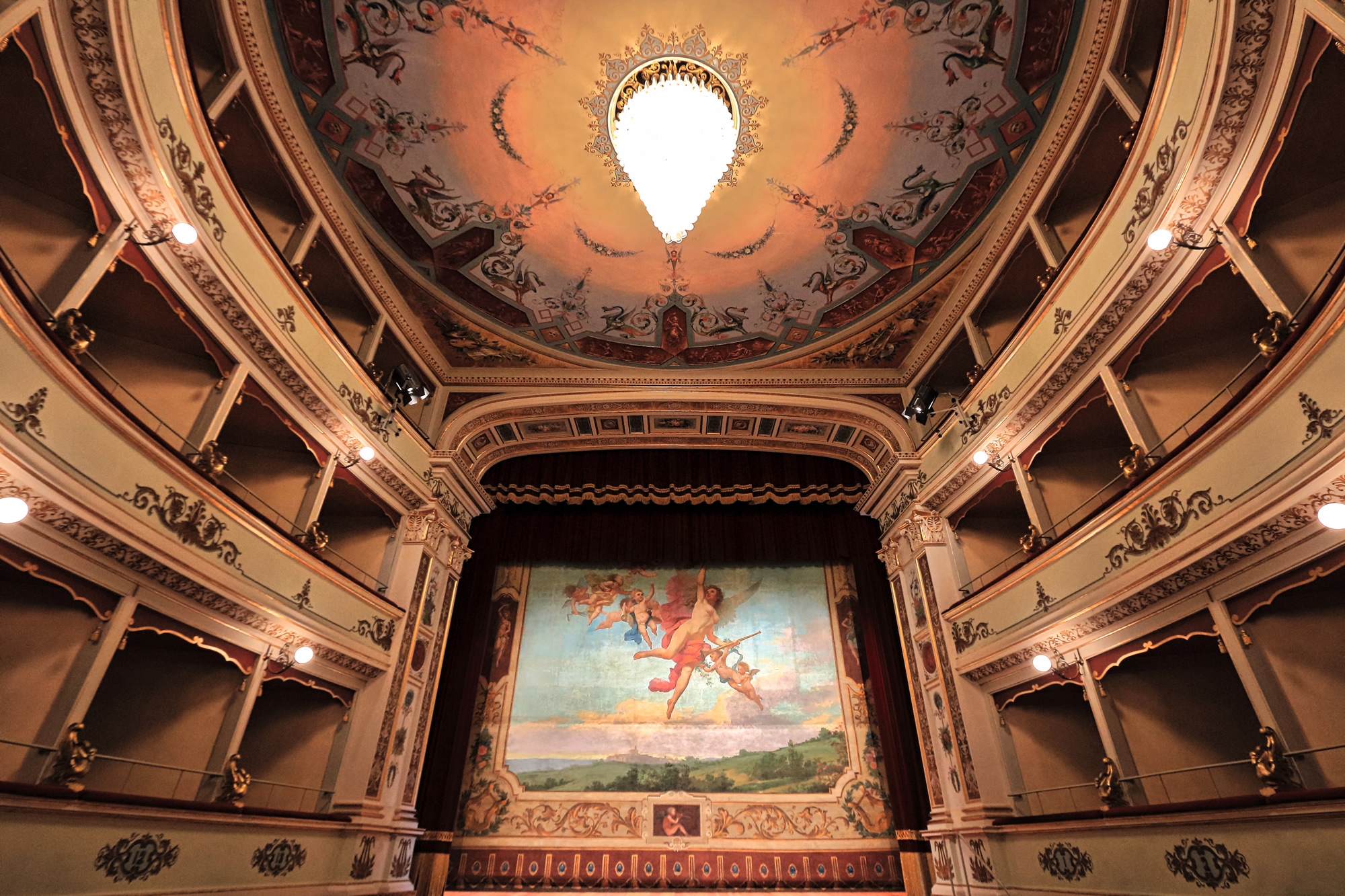 The performance hall has a “bell” or horseshoe-shaped curve plan, which proved to be more congenial than the circular shape at the beginning of the nineteenth century, because it facilitated the “clear vision” of the stage for spectators in the most concave sector of the three orders. The galleries are divided into boxes by compartments, according to the “beehive” scheme that dates back to the Baroque period, with three tiers of boxes for a total of 38 units. The Theatre is characterized by the decoration of the band parapets, while the proscenium is delimited by pairs of Corinthian-style pilasters, and concluded by an architrave painted with false coffered. The ceiling presents classical style images, alternating with floral ornamentation that Marvardi had learned from the master Mantovani.

It is worthwhile to approach the stage to admire the original wooden grating that surmounts it, where it is possible to glimpse the ropes and imagine the original technical set-up. An interesting element still present in the upper left, above the back of the stage, is a sound effects tool, a sort of metal barrel containing stones which,when rotated with a crank, served to create the sound effect of thunder during opera representations.

In the twentieth century, the theatre was used for all sorts of performances and parties, as well as the carnival dance,many of which are testified by photos of the time. After years of inactivity, restoration and structural consolidation work began in the early 1980s. Restoration was completed on the occasion of the Pergolesi Spontini Festival on 9th September 2001.

The theatre is used for theatrical events organized by various associations but is also available for private initiatives (events, conferences, civil weddings).

To stay up to date, you can follow the Teatro Comunale di Montecarotto on its Facebook page.