The origin of the name of the village, Montecarotto, has given rise to numerous picturesque hypotheses: the original toponym could have been “Mons Iscariotae“, that is, the town of Giuda Iscariota (Judas). Ironically, it is said that the tree on which Jesus’s traitor disciple hanged himself is preserved in the village.

In reality, the name derives from the Latin “Mons Arcis Ruptae”, that is “Mount of the broken fortress”, in reference to a fortification placed in defence of a strategically important location, whose existence is still attested by the remains on which the collegiate church is built. It is said that the fortress was destroyed by a war event or an earthquake. However, there is no information on the time and on the architects of the construction of the fortress, therefore it is impossible to make any further hypotheses on the existence of this centre in the Late Middle Ages.

More precise information about Montecarotto comes after the year 1000, when the reality of the seven Pievi existing in the diocesan territory of Jesi emerges, with its castles, its “villas” and numerous churches.

The Pieve was an area in which the most important church in the area exercised ecclesiastical jurisdiction, equipped with a baptismal font, called “parish”, on which the other parish churches scattered throughout the district depended, it provided for the spiritual care of populations residing there. The Pieve di Montecarotto, if not the most important of the Diocese of Jesi, was certainly the largest, extending for almost 60 Km2, including the current municipalities of Montecarotto, Poggio San Marcello, Castelplanio and Rosora. The castle of Montecarotto  dominated the top of the hill, at the centre of which was the fortress, while the plebeian church remained located outside the castle walls. 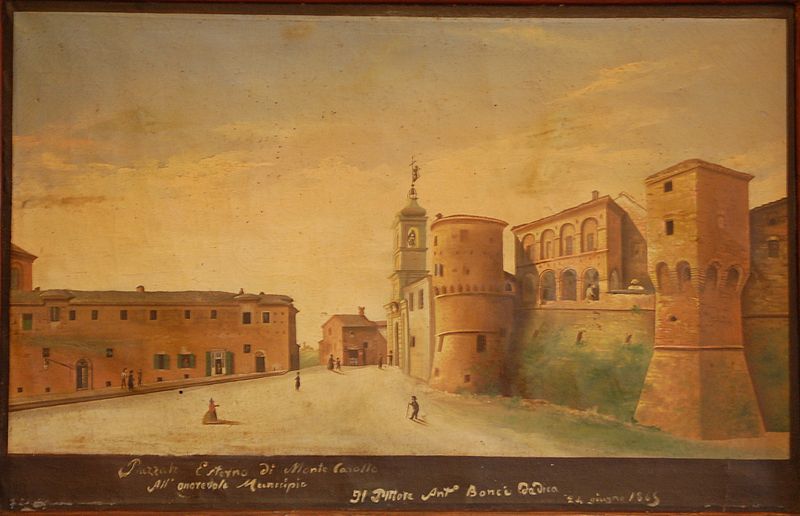 CASTLE OF THE COUNTY OF JESI

The fourteenth century and the first half of the fifteenth were marked by the dramatic events of the Singorie (Lordships) and by tragic natural disasters; at the end of that period, however, Montecarotto emerges as a parish and castle belonging to the Contado di Jesi, an increasingly important centre for the number of inhabitants and for its administrative, religious, cultural and artistic institutions. In that same period the new parish church was built within the castle walls and its bell tower erected on the foundations of the ancient destroyed fortress. The Montecarottese community built them both, and therefore always claimed the patronage of that church. The walls were built in 1509; many works of art enriched the churches of the town, including noteworthy ones by Ramazzani and Antonuccio da Jesi. 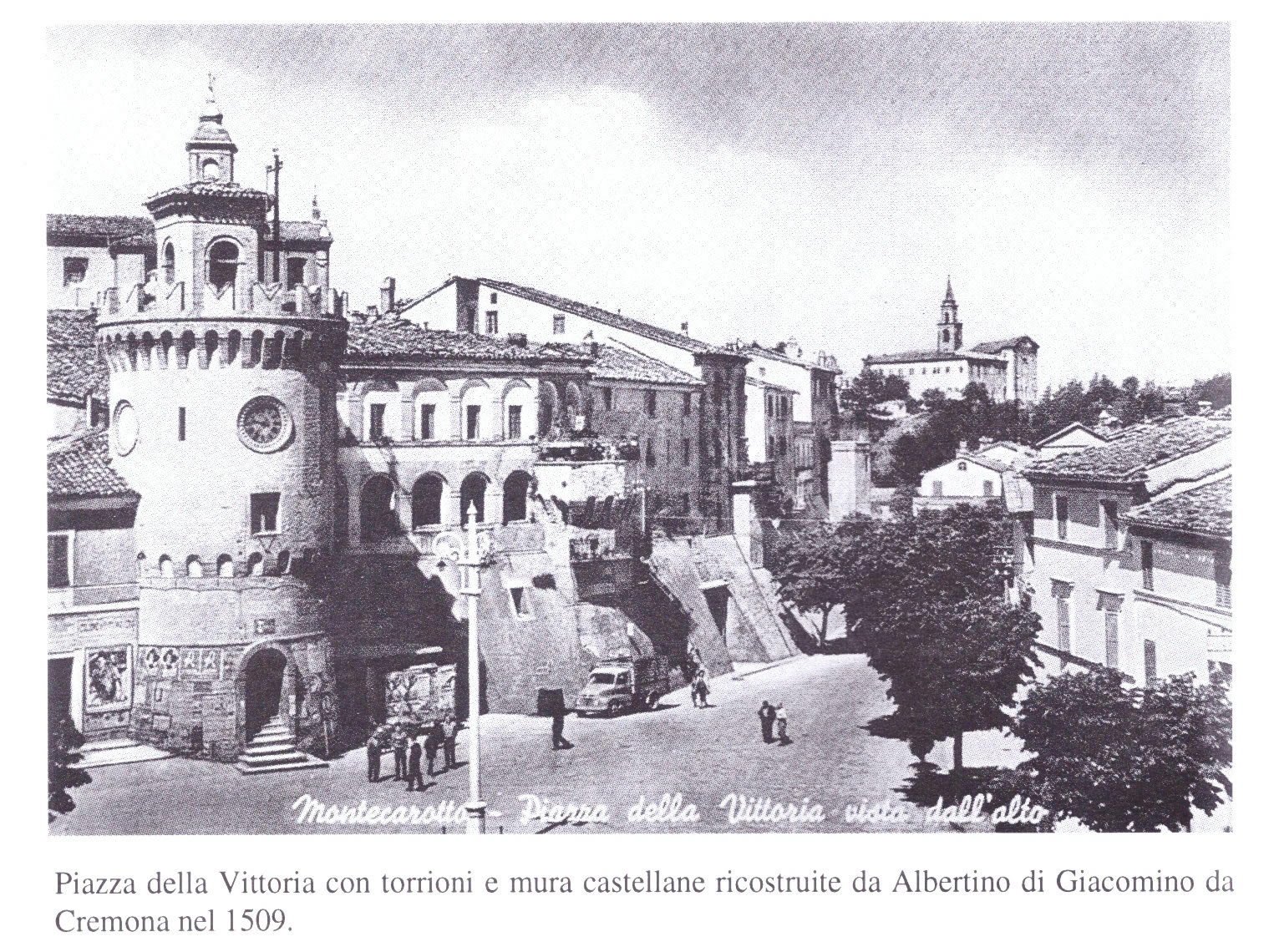 In the seventeenth century the convent of San Francesco and the female Carmelite monastery were built next to the church of the Madonna delle Grazie, rebuilt in the early eighteenth century. Many other churches were built in the town and in the neighbouring countryside.  Two other hamlets also developed outside of the village walls  during these years. In the 17th century, the cult of San Placido took over,  in the place of the ancient patrons of the village: San Filippo and San Giacomo. San Floriano also received a vast cult in the area, as the repeated images of the patron saint of the “State of Jesi” attest. On the feast day of the Saint, May 4th, Montecarotto also sent one representative to Jesi to take part in the town’s Palio; while for Jesi this indicated the Castle’s subjection to the hegemonic city, for the village it was only meant as  an act of worship to the Saint and of fraternity with the city community.

At the end of the seventeenth century the “State” of Jesi assumed a new institutional form with the “free government” governed by a Governor directly dependent on Rome, which increasingly conditioned the autonomy of the individual Castles. Hence Montecarotto became one of the leading castles in the fight against the arrogance of the city.

THE PONTIFICAL STATE, THE KINGDOM OF ITALY AND THE TWENTIETH CENTURY

The eighteenth century, as a consequence of the intelligent grain policy established by  the Popes, brought new wealth throughout the Vallesina (Esino river valley), and also in Montecarotto. The great buildings of that century bear witness to this: the Collegiate Church, the rectory, the churches of the Madonna delle Grazie, the Madonna del Popolo and others, as well as notable noble buildings. The municipality had 2537 inhabitants.

The French invasion meant the global upheaval of the secular political order of Vallesina: Montecarotto was elevated to the status of Canton of the Metauro department, unique among the Castles of Vallesina. In 1808, with the constitution of the Napoleonic Kingdom of Italy, the ancient relationship between Jesi and the other Castles acquired administrative autonomy,which was confirmed when the Papal Government returned. 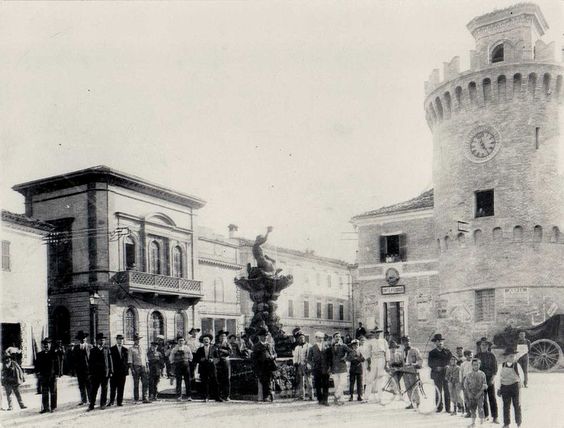 The annexation of the Marche to the Kingdom of Italy in 1860 meant even further recognition of the importance of Montecarotto, which at the end of the 19th century exceeded 3000 inhabitants (of which two thirds in the countryside, where the majority of the population were sharecropping peasants) becoming the capital of Mandamento, in whose jurisdiction were the municipalities of Serra de’ Conti, Poggio San Marcello, Castelplanio, Mergo and Rosora. A court of law, prisons, the notarial archives and the consortium tax office were the expressions of this administrative pre-eminence. There are many works that were created in this period: noble buildings of considerable prestige, the theatre, the hospital, built in the former convent of San Francesco from which the Franciscan friars had been expelled, the schools, the Carabinieri barracks, the slaughterhouse, the fish store. The population approached 3500 units.

The growth of the local upper class was interrupted by the profound political and economic changes of the twentieth century. The advent of industrialization and the crisis of sharecropping, accompanied by an increasing abandonment of the countryside, but not of agriculture, on the one hand rewarded the manufacturing sector and encouraged cooperative solutions, on the other hand did not prevent the demographic outflow, which has not stopped since the 1950s.