In the Marche region, from the early 1600s to the mid 1900s, a “dynasty” of tower watchmakers stood out, operating first in Sant’Angelo in Vado (PU) and then in Montecarotto (AN) . 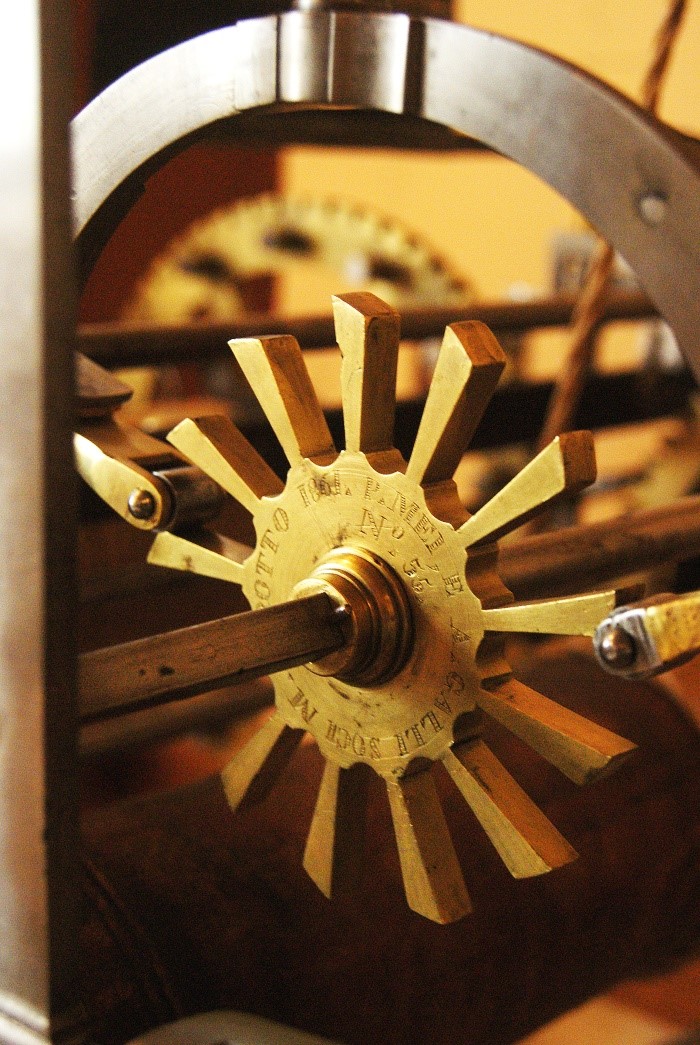 FROM SANT’ANGELO IN VADO TO MONTECAROTTO

In 1826 Antonio Podrini died while he was building the clock in Cingoli (MC). The business passed into the hands of his shop heirs: his son Eustachio Podrini and his partner Pietro Mei from Montecarotto. Pietro Mei, of humble origins, probably demonstrating a precocious talent, had been sent to learn the job in Sant’Angelo in Vado, probably thanks to acquaintances within the agrarian or religious bourgeoisie; over time he had gained Podrini’s trust, eventually becoming his partner. In fact, Pietro Mei would become the Marche watchmaker par excellence of the 1800s. He established his workshop in Montecarotto and continued the activities of his master.

Unlike Podrini, Mei invariably signed the mechanisms on the escape wheel by engraving his name, the village of origin, the year of construction and the work number. His workshop became so renowned that, towards the middle of the 19th century, a 23-year-old blacksmith from San Marcello, Antonio Galli, moved to Montecarotto to specialize in the construction of “time machines”, becoming in turn Mei’s partner and prosecutor of the activity upon his death. The same story repeats itself around 1890 when a young Senigallian, Edoardo Marconi, moves to Montecarotto to attend “the University of horology”, that is the workshop of Pietro Mei and Antonio Galli, whose activity he would continue always declaring, in his advertising postcards, to be his “heir and successor“. Marconi worked in the construction of tower and house clocks, but also in the maintenance of the mechanisms of his predecessors, until the advent of electricity which would completely transform the watchmaking sector.

Pietro Mei in particular is remembered because he revolutionized the construction technique of watch mechanisms, trying to reconcile the need for simplification, reduction of spaces and production times to guarantee what he promised to clients, that is, “politeness and elegance“. His model would last for a long time and would also be adopted by his successors with few modifications. Mainly, he managed to make hour and quarter sounds with a single mechanism (“train”), through a mechanical exchanger of his own invention, he reduced the number of gears for activating the ringtones and invented a type of escapement at rest by means of a cylinder wheel which due to its uniqueness is called the “Mei escape”. In the Marconi period, however, technology  changed, and the construction of components was left to industry, so the watchmaker mainly assembled and no longer applied to the construction of components by casting and forging. Marconi  dedicated himself to the maintenance of the mechanisms of his predecessors, as part of his business. 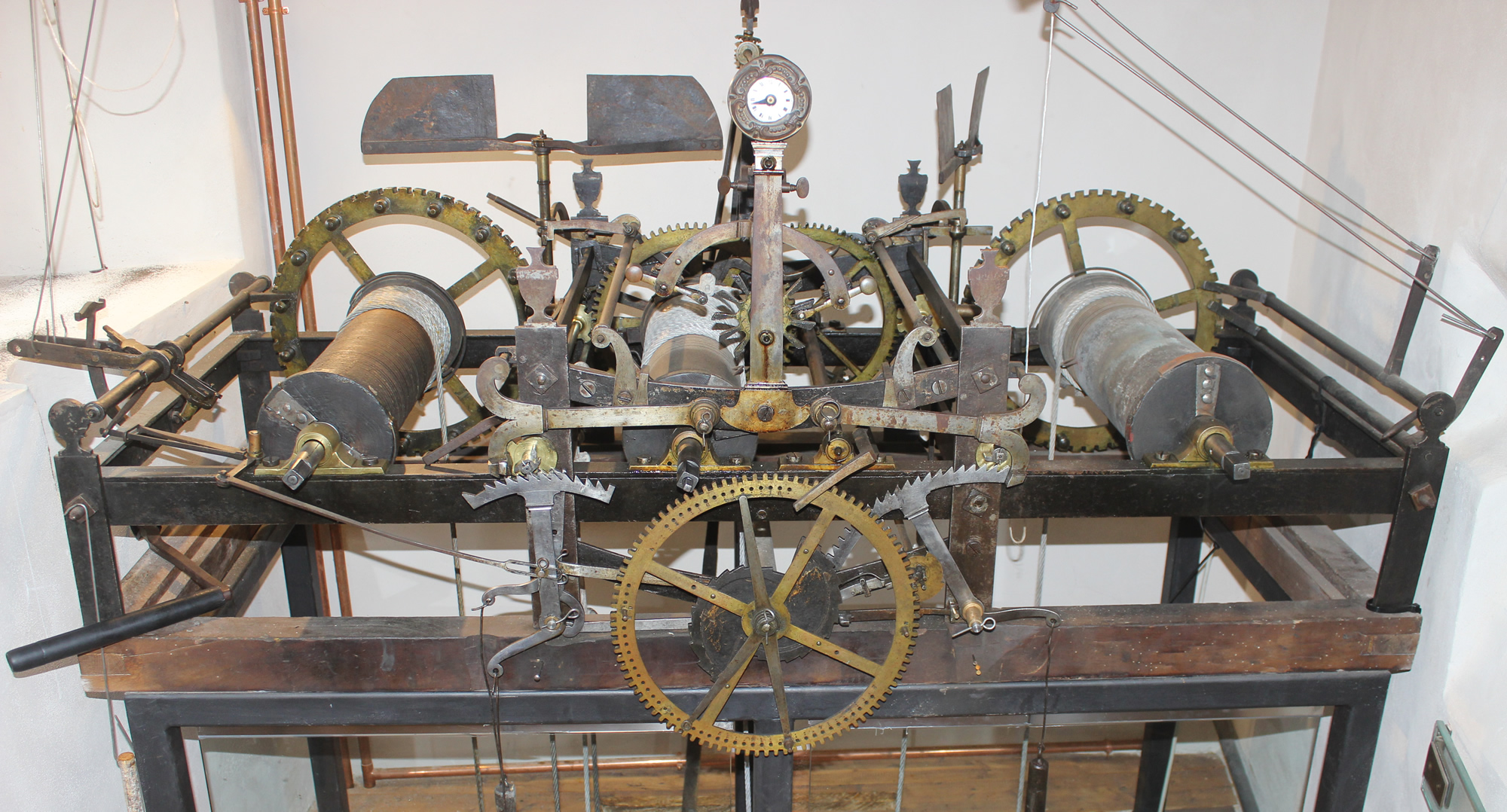 The activity of the Montecarotto watchmakers for about a century led them to build watches for the various municipalities of the Marche region, sometimes also in Abruzzo and perhaps in Romagna and Umbria. Pietro Mei, when still a collaborator of Antonio Podrini, had gone as far as Rome to install a mechanism in an important Roman building.

The main Mei mechanism still existing and functioning in its original specifications (manual daily recharge) is located in the civic tower of Montecarotto. It is a clock manufactured by Pietro Mei in 1849, “work no. 22″. It was dismantled and cleaned in 2014, as part of the restoration project of the civic tower; it can be visited by appointment or on occasions when the tower is open to the public during some events.

Some still functioning mechanisms  by Marconi can be found in Chiaravalle (AN) in the library building and in Ripatransone (AP) at the former episcopio,which is now one of the headquarters of the Sistine Museum, while those of Galli can be seen in the Cathedral of Fermo and in the civic tower of Recanati in Piazza Leopardi. Many others however are present in the different municipalities of the Marches, but not functioning or not accessible to the public. 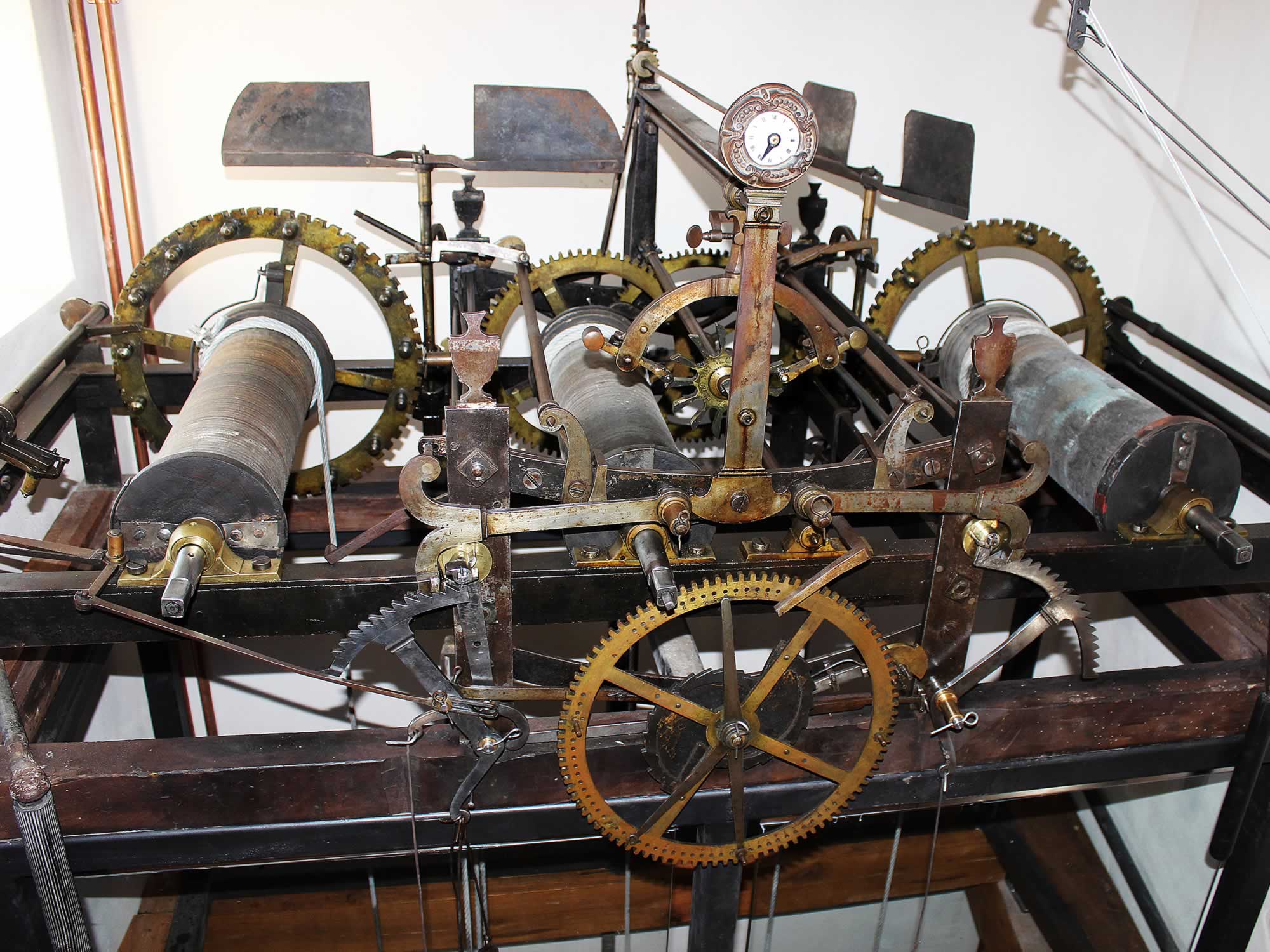 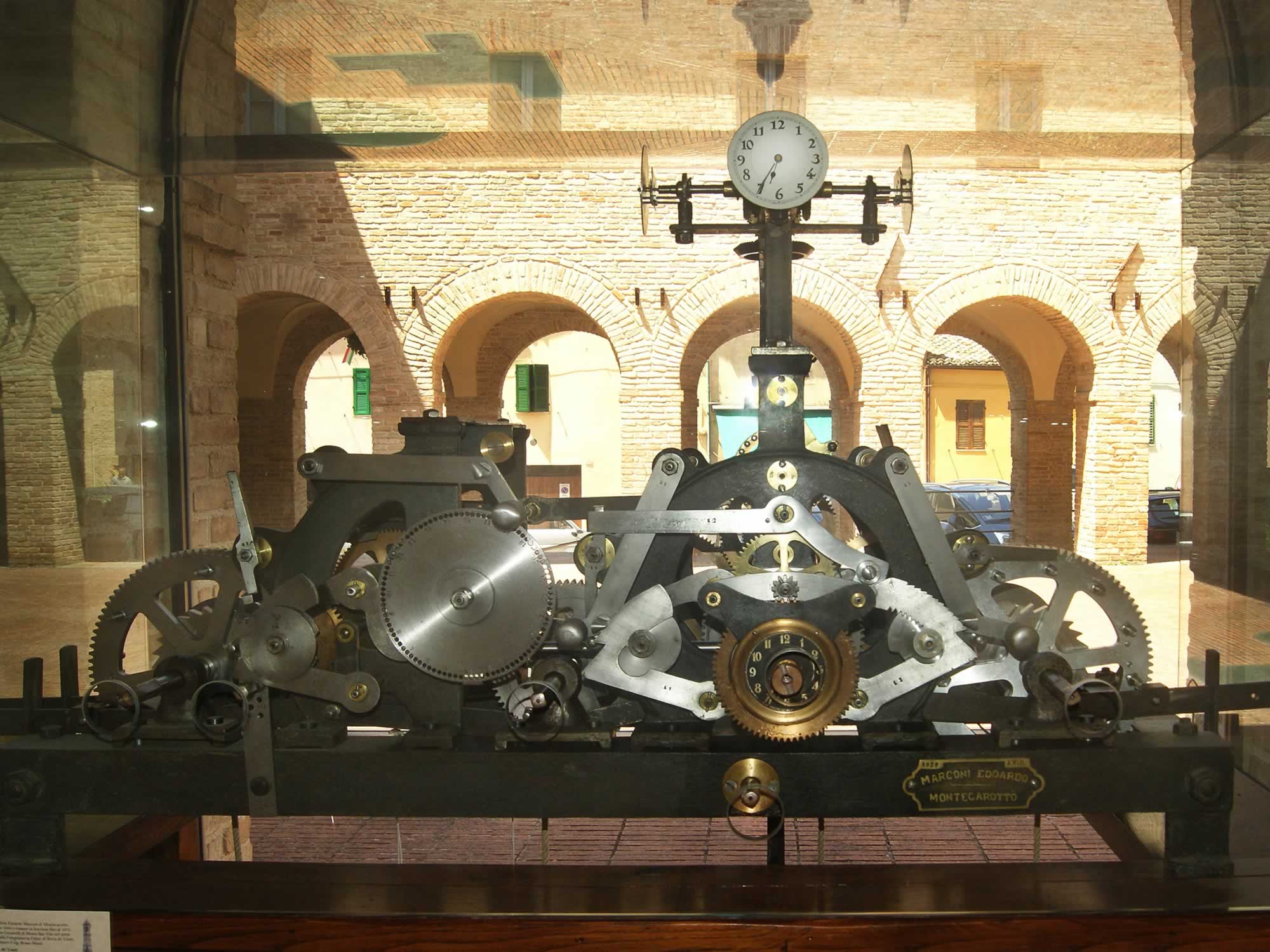 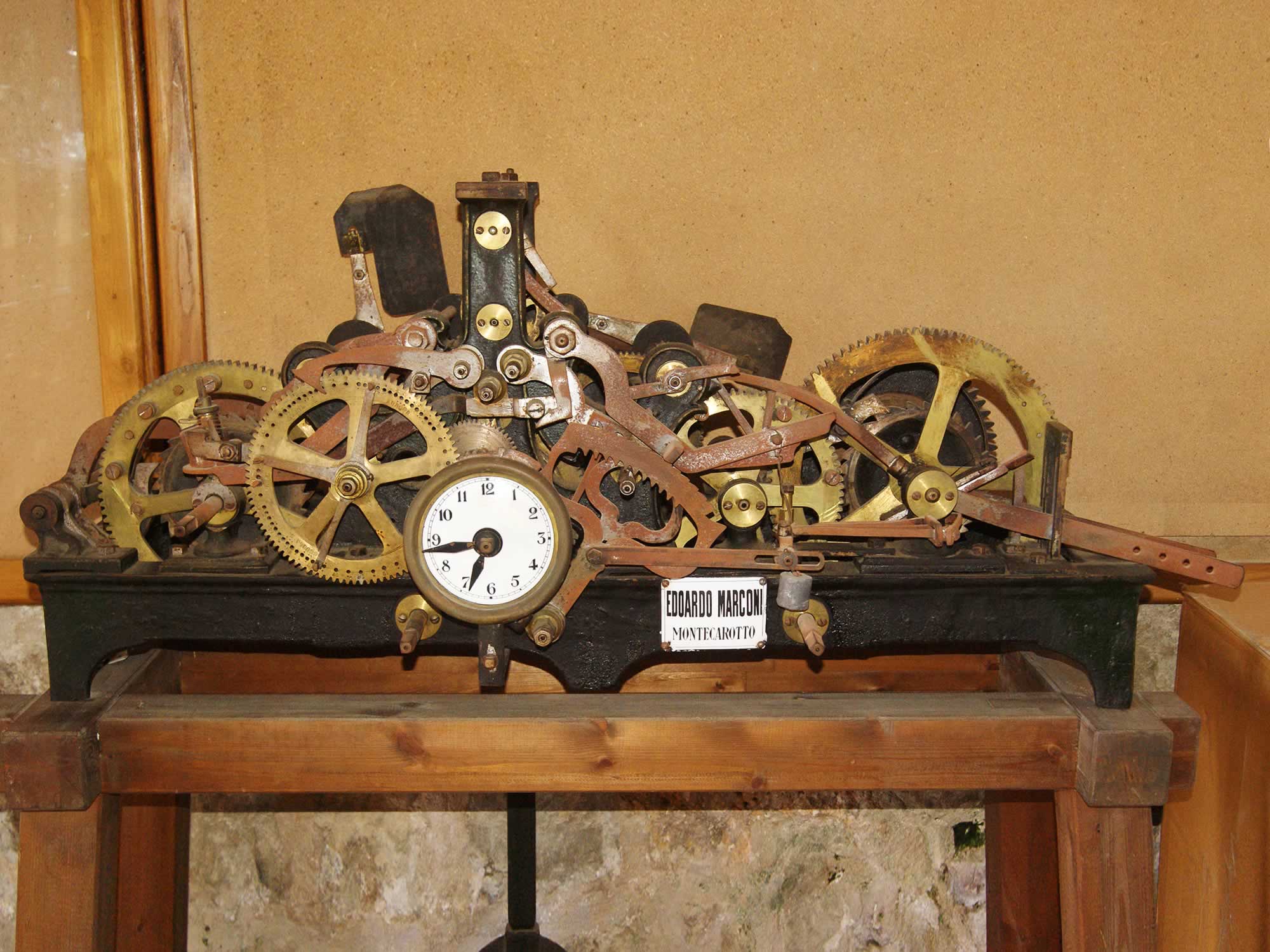 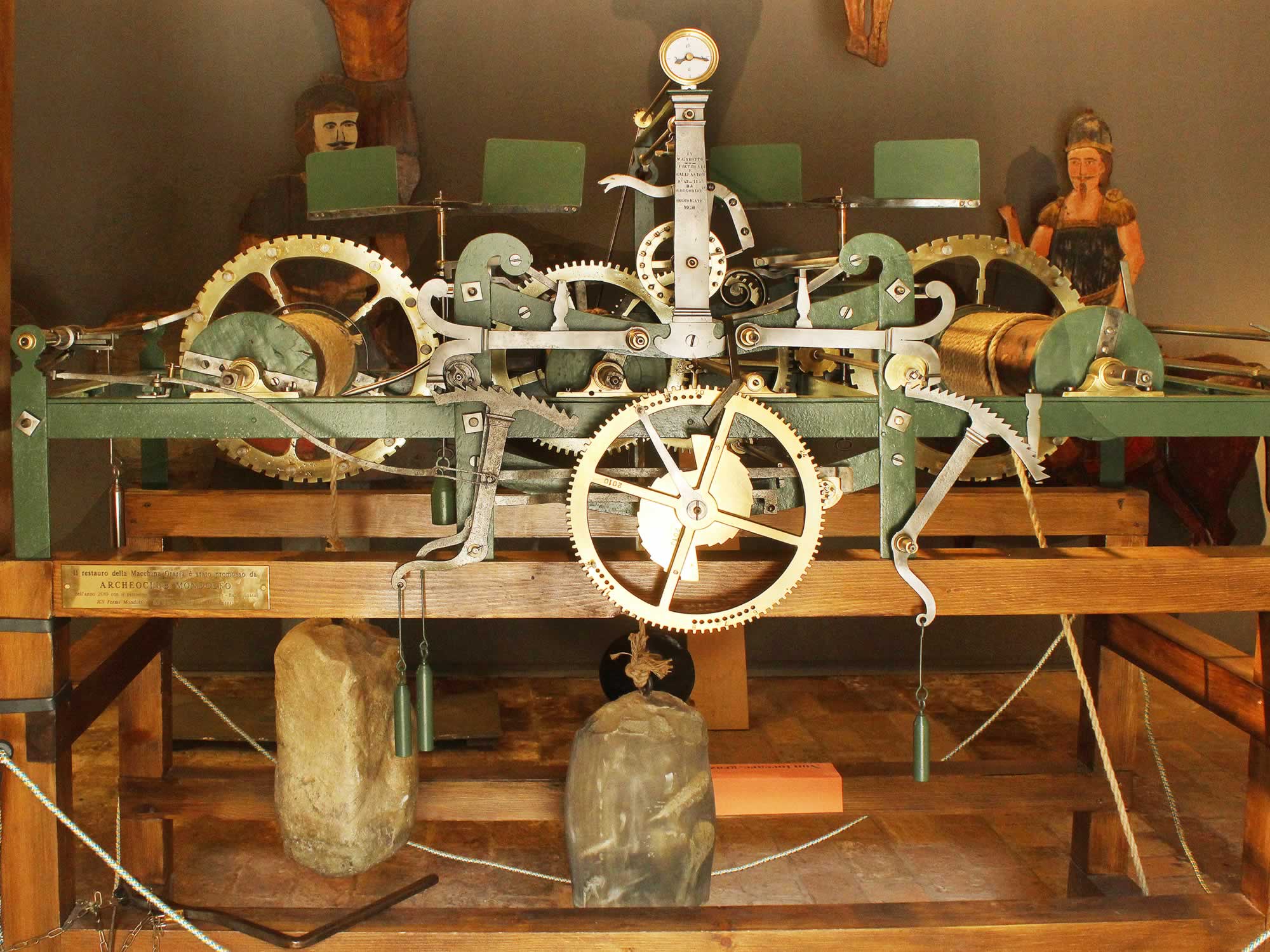 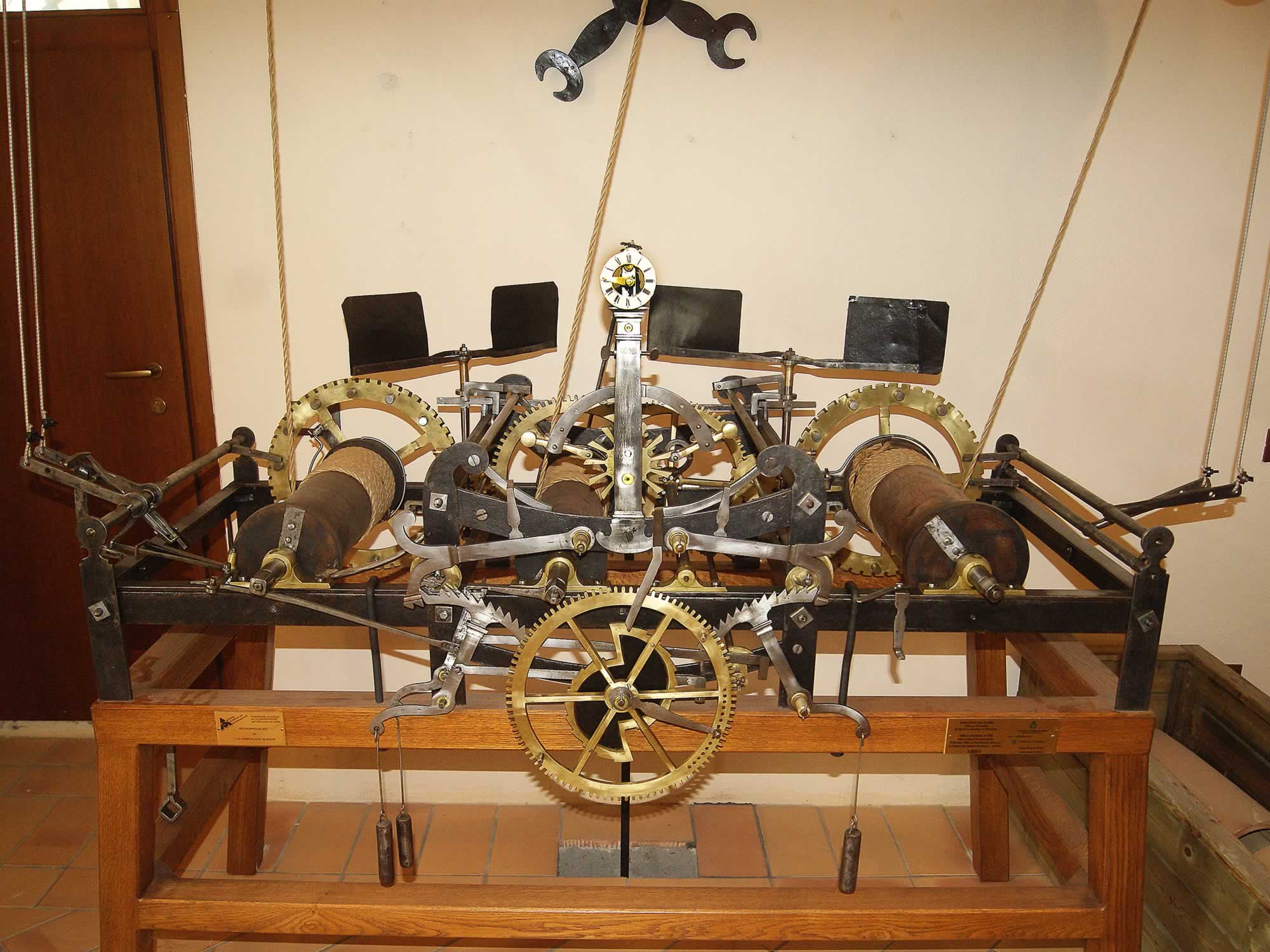 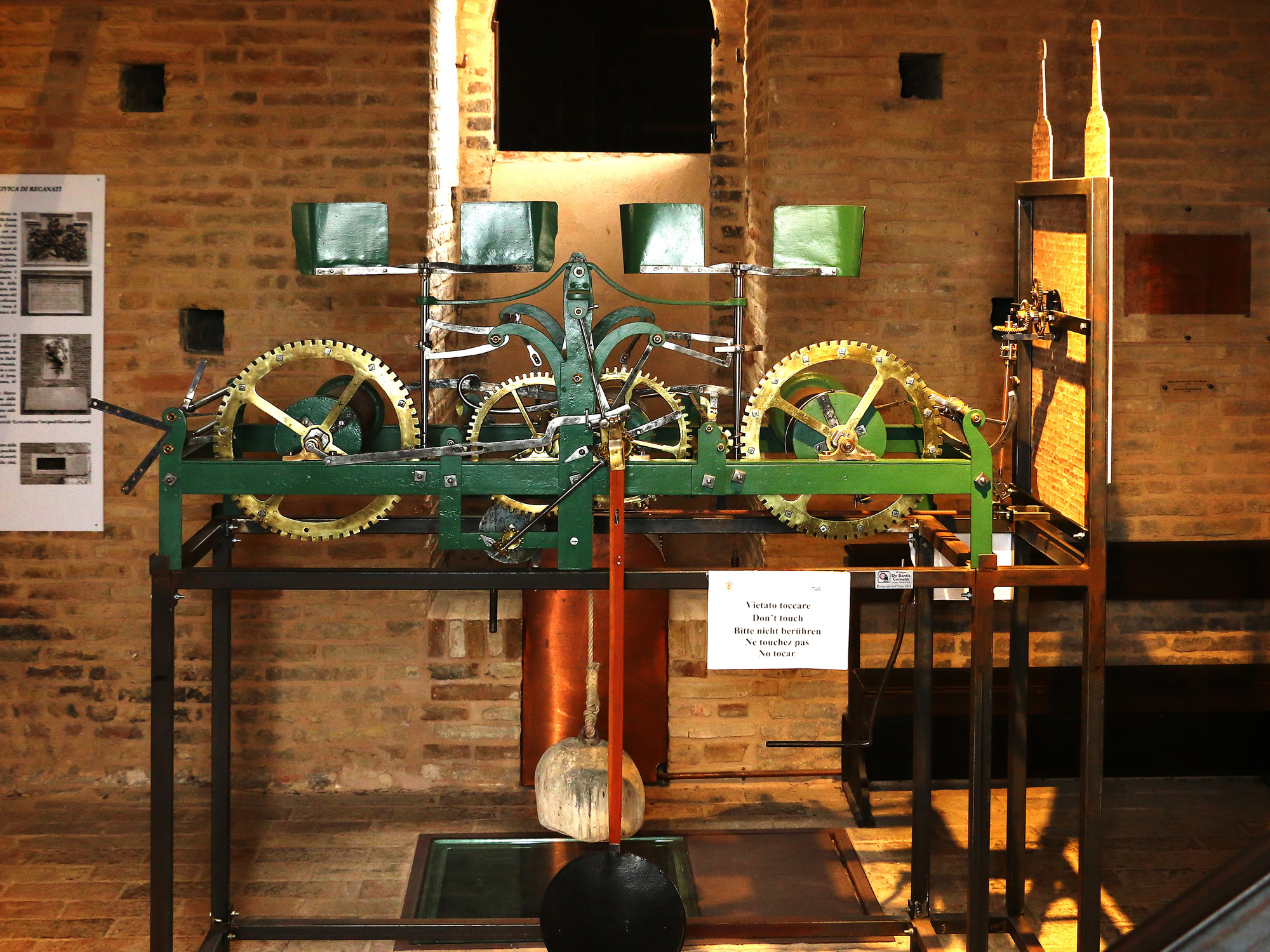 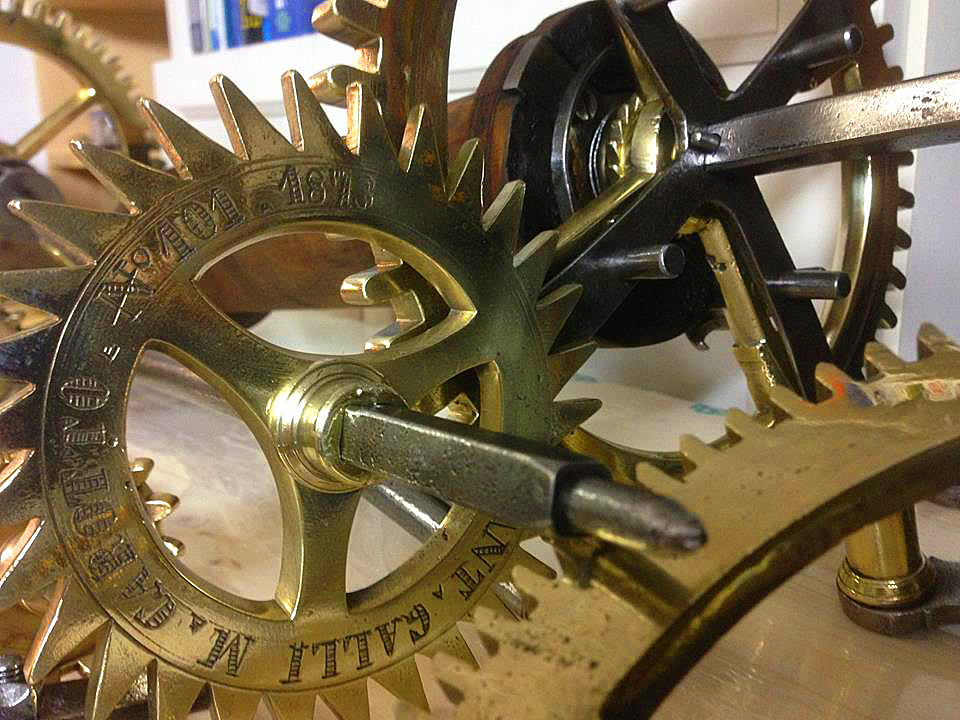 The book is available at the Municipality of Montecarotto