The first and oldest news concerning the Montecarotto organ builders can be found in the historical documentation of the Basilica of Loreto, where the name of “Frate Uliviero da Monte Carotto” appears, to whom payments were made for the construction of the first large organ of the Sanctuary between 1511 and 1513.

Loreto had recently been elevated to a city and a basilica was being built there, which would become one of the most important sanctuaries dedicated to the Virgin Mary in the following centuries. In Montecarotto there was a prestigious organ builder, who had consequently been called to collaborate on that important project with his work. Therefore, Friar Giacomo Olivieri of Montecarotto (Franciscan Monk, born around 1460 and died in 1517 in the convent of S. Francesco alle Scale in Ancona, after having been in the convent of San Floriano di Jesi) built the first organ of the Santa Casa di Loreto .

The instrument was placed in a choir loft above the entrance to the sacristy of San Marco (formerly called “della Tesoreria”, the first to the right of the Holy House) and called the “Julian” organ because it was built in the last years of the pontificate of pope Julius II. The organ has unfortunately been lost; however, the valuable canvas doors, painted in oil with the scene of the Annunciation, are still preserved, and can still be admired today at the Museum-Picture Gallery of the Apostolic Palace of Loreto. 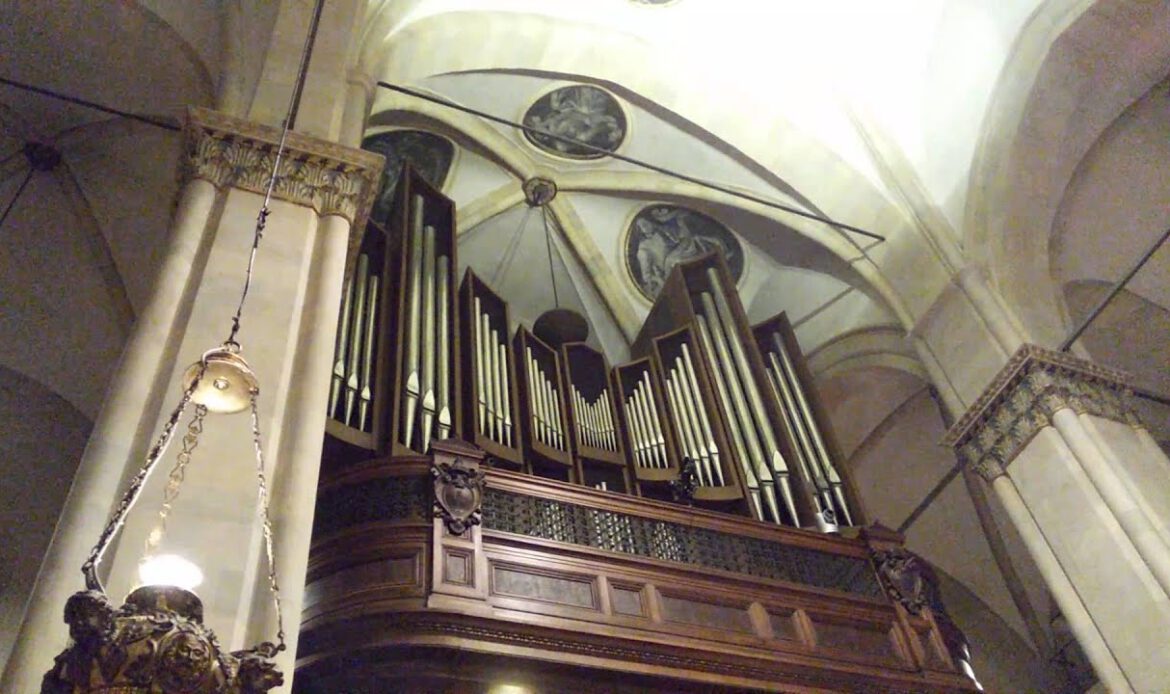 THE CURIOUS STORY OF “IL PELLEGRINO”

Let’s then take a leap forward in time, to the early 1700s, when a curious character, who  shrewdly called himself “The Pilgrim“, began to make a sort of Grand tour through the villages of the Jesi countryside, describing people’s life and opinions. On the evening of 4th October 1738, “Il Pellegrino” arrived at the convent of the Observant Minor Friars in Montecarotto, where the Feast of St. Francis of Assisi was being celebrated, at the time revered as one of the town’s patrons. In the story we read: «[…] I saw the village all surrounded by strong walls, and towers full of Inhabitants not just peasants, but Artists, also Watchmakers, Organ builders, Weapon makers, Apothecaries, Surveyors, without naming many other inferior Arts to the aforementioned. And I finally saw a remarkable Citizenship, which lives by entry, and dresses, and walks with the sword, and speaks as the citizens of Jesi do […] ». Certainly our friendly traveller should have visited the workshop of Don Benedetto Antonio Fioretti, thus becoming acquainted with one of the excellences of the Montecarotto economy of the time, namely the construction of organs, so much so as to indicate it in his story. Fioretti was also known as a harpsichord maker.

THE DEVELOPMENT OF THE MONTECAROTTO SCHOOL

Thanks to the canon Don Benedetto Antonio Fioretti (1661-1739), an actual School developed in Montecarotto, introducing Lattanzio Guidotti di Porchia, Giuseppe Attili da Ortezzano, Saverio Vici (1713-1802) of Montecarotto and Angelo Albertini of Jesi. Saverio and his son Sebastiano (1755-1830) would continue the organ-building tradition by transmitting the art to the pupil Angelo Morettini of Perugia, who would continue until the first half of the 20th century with his son Nicola. We also remember two other Montecarotto organ builders of the 1700s, Domenico and Bernardino Gasparrini, who must have been colleagues of Don Benedetto Antonio Fioretti, but not his pupils, embodying an autonomous family organ-building activity. Since there are common technical-constructive and design elements, one could also think that Domenico Gasparrini and Benedetto Antonio Fioretti, the dating of whose organs are almost the same, both artistically descend from a common master, of whom however no details have yet been documented. 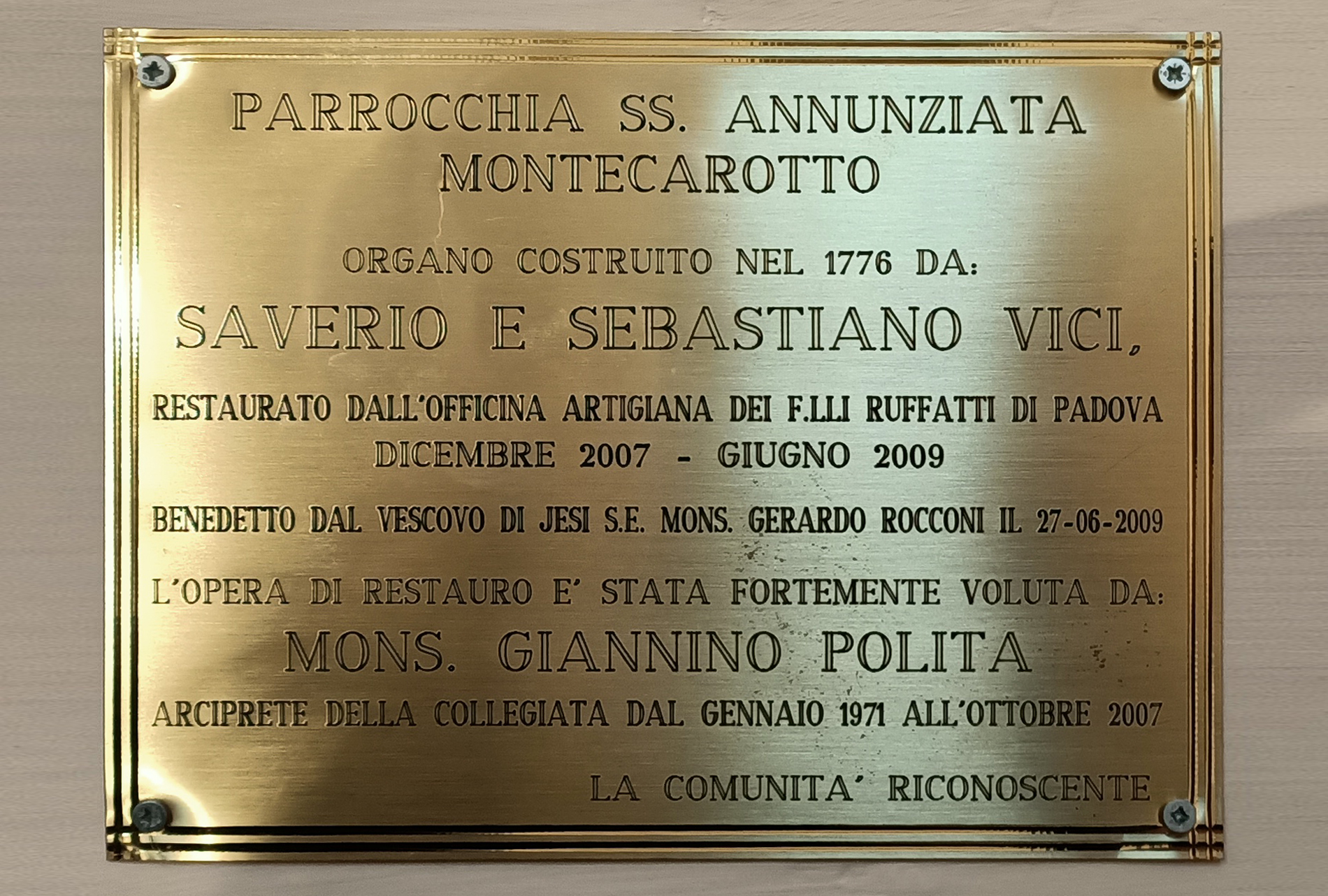 In the Marche of 1700-1800, the Montecarotto organ building school represented the only actual “school”, that is, an entity where relationships are configured from teacher to student between subjects not belonging to the same family. It is its own components that define it as such: in fact, on the valve of a bellows of the Pianello di Ostra (AN) instrument we read “On July 28/1724 […] I begun these two / bellows in MonteCarotto under the / Scola of Mr. D. / Benedetto Antonio/ Fioretti / I Angelo Albertini”. To date, a fundamental question for the complete historical reconstruction of the Montecarotto organ building school has not yet found an answer, namely whether the tradition that flourished towards the end of the seventeenth century with the “Scola” of Don Benedetto Antonio Fioretti can be connected to the precursor Friar Giacomo Olivieri. 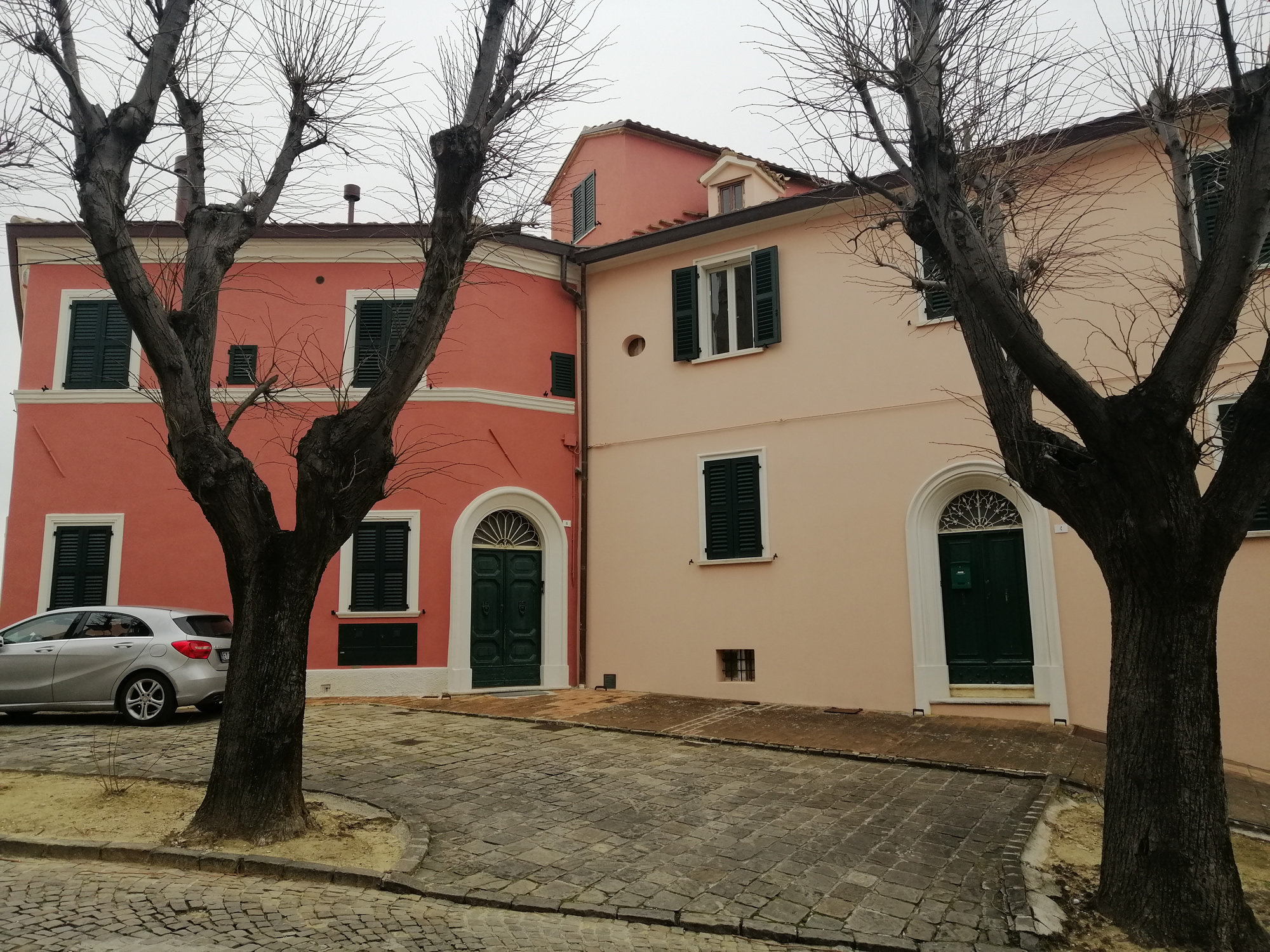